“We address especially the young people: You must joyfully accept the patrimony of the language which the Church holds in high esteem and must, with energy, make it fruitful. We exhort you all to lift up high the torch of Latin which is even today a bond of unity among peoples of all nations.”
Saint John Paul II

The Catholic Church has spoken and prayed in the languages of all peoples since Pentecost. Nevertheless the Latin language has always been held in very high esteem by the Church and by the Roman Pontiffs. They have assiduously encouraged the knowledge and dissemination of Latin, adopting it as the Church’s language, capable of passing on the Gospel message throughout the world. 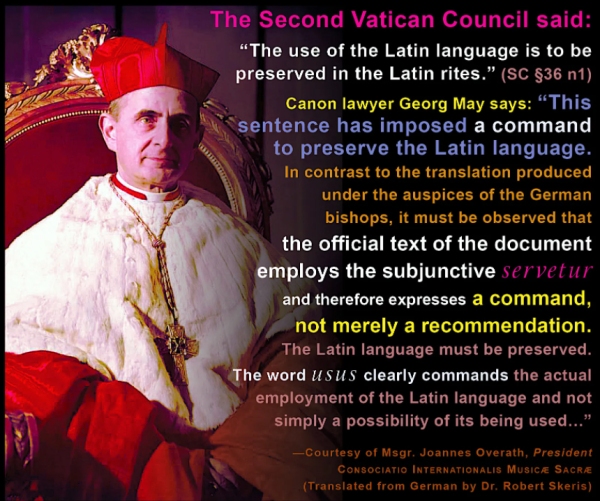 In God’s Providence the wisdom of the ancient Greek and Roman cultures had prepared the way for Christianity. The Word became flesh at a time when many nations were united under the authority of the Roman Empire. Latin has been the official liturgical language of the Roman Catholic Church since the 4th Century. 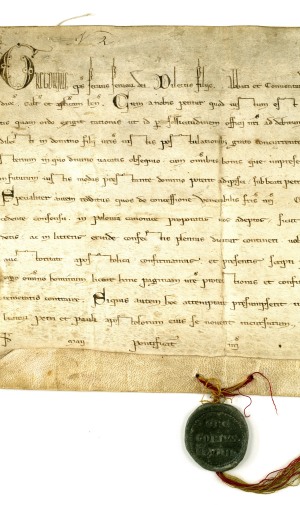 In addition to the Second Vatican Council, several recent Popes have definitively taught the primary place of Latin for three reasons:
Latin is Universal
Of its very nature Latin is most suitable for promoting every form of culture among peoples. It does not favor any one nation, but presents itself with equal impartiality to all and is equally acceptable to all. Precisely in order to highlight the Church’s universal character, the liturgical books of the Roman Rite, the most important documents of the Papal Magisterium and the most solemn official Acts of the Roman Pontiffs are written in this language in their authentic form.

Latin is Immutable
Latin safeguards the faith because it is set and unchanging. It has long since ceased to be affected by those alterations in the meaning of words which are the normal result of daily, popular use. If the truths of the Catholic Church were entrusted to modern languages, which are continually liable to change, the meaning of these truths would not be manifested to everyone with sufficient clarity and precision. There would, moreover, be no language which could serve as a common and constant norm by which to gauge the exact meaning of other renderings.

Latin is Non-vernacular
The Catholic Church has a dignity far surpassing that of every merely human society, for it was founded by Christ the Lord. It is altogether fitting, therefore, that the language it uses should be noble, majestic, and non-vernacular. Latin is a general passport to the proper understanding of the Christian writers of antiquity and the documents of the Church’s teaching, and a means for teaching highly intelligent thought and speech. It is also a most effective bond, joining the Church of today with that of the past and of the future in wonderful continuity.

Lex orandi lex credendi: the rule of prayer is the rule of belief.
In addition, the use of sacral language for the liturgy instead of everyday speech is a very powerful instrument for instilling in the lives of the Christian faithful the elements of faith and Christian morality. By means of words of praise and adoration that foster reverence and gratitude in the face of God’s majesty, his power, his mercy and his transcendent nature, the Latin texts or faithful translations of them will respond to the hunger and thirst for the living God that is experienced by the people of our own time, while contributing also to the dignity and beauty of the liturgical celebration itself.
Since the Second Vatican Council, the Church has consistently taught that the Latin language is to be preserved in the Latin rites, that the faithful should be able to say or sing together in Latin those parts of the Ordinary of the Mass which pertain to them, and that Gregorian chant should be given pride of place. (C.f. Code of Canon Law (canon 928); Sacrosanctum Concilium #36, 54)

Most compelling is Pope Blessed Paul VI’s appeal to the superiors of religious institutes about retaining Latin in the Divine Office, abridged here: 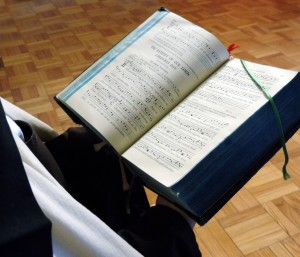 Your families, dedicated as they are to God, have always held in honor the Sacrifice of Praise: that is, the psalms and hymns by which the hours, days and seasons of the year are hallowed with religious devotion. With good reason is it held that nothing should be preferred to so holy a work as this.
Yet, We learn that while some are very faithful to the Latin language, others wish to use the vernacular within the choral office. Others, in various places, wish to exchange that chant which is called Gregorian for newly-minted melodies. Indeed, some even insist that Latin should be wholly suppressed. We have been somewhat disturbed and saddened by these requests. One may well wonder what the origin is of this new way of thinking and this sudden dislike for the past.

What is in question here is not only the retention within the choral office of the Latin language, though it is of course right that this should be eagerly guarded and should certainly not be lightly esteemed. For this language is, within the Latin Church, an abundant well-spring of Christian civilization and a very rich treasure-trove of devotion. But it is also the seemliness, the beauty and the native strength of these prayers and canticles which is at stake: the choral office itself, “the lovely voice of the Church in song” (Cf. St Augustine’s Confessions, Bk 9, 6). The traditions of the elders, your glory throughout long ages, must not be belittled.

Of course, the Latin language presents some difficulties for the new recruits to your holy ranks, but they should not be reckoned insuperable. Moreover, those prayers, with their antiquity, their excellence, their noble majesty, will continue to draw to you the young, called to the inheritance of our Lord. On the other hand, that choir from which is removed this language of wondrous spiritual power, transcending the boundaries of the nations, and from which is removed this melody proceeding from the inmost sanctuary of the soul, where faith dwells and charity burns – We speak of Gregorian chant – such a choir will be like to a snuffed candle, which gives light no more, no more attracts the eyes and minds of men.

It is the same Church which has introduced the vernacular into the sacred liturgy for pastoral reasons, that is, for the sake of people who do not know Latin, which gives you the mandate of preserving the age-old solemnity, beauty and dignity of the choral office, in regard both to language, and to the chant.

It is true that a person can pray in Latin fruitfully without understanding the words—most of our Carmelite saints prayed this very way. Historically, though, many vocal prayers in the vernacular had been added to the horarium in order to nurture devotion, a practice detrimental to our eremitical life. As Carmelites, called by our Rule to ponder the law of the Lord day and night, we have found that praying—and understanding—the Divine Office in Latin brings us closer to the original Scriptural texts than ever before, and is a deep source of spiritual nourishment.

Back to Sacred Liturgy