Praised be Jesus Christ and the Virgin Mary!

Our Discalced Carmelite Monastery of the Infant Jesus was founded within the Diocese of Gaylord in beautiful northern Michigan by Mother Teresa Margaret of the Sacred Heart (1911-2013). She brought with her the Spanish Teresian Carmelite tradition which she had inherited from the Mexican foundresses of Grand Rapids Carmel, particularly that of the dynamic Mother Elias of the Blessed Sacrament, under whom she had made her novitiate.

Mother Elias, a fiery, faith-filled woman, had escaped severe religious persecution in Mexico in the early twentieth century. Having been miraculously saved from a firing squad, she successfully led the entire community of sixteen Sisters to safety in America. She was a demanding yet loving Novice Mistress, who played a significant role in the formation of the first American postulants who joined the exiled community, many of whom would go on to become foundresses of traditional Carmelite monasteries themselves.

In 1950, Mother Teresa Margaret was asked to begin a foundation here in Traverse City.  God’s loving and providential care over the new venture quickly manifested itself when it came to choosing a name, or title, for the new monastery. 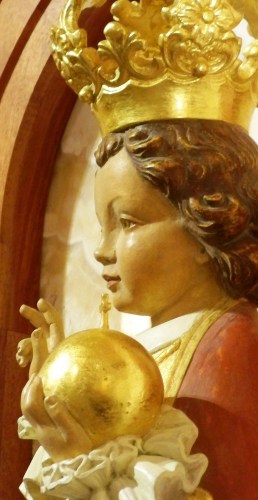 Mother greatly desired to found our house under the title of Our Holy Father St. John of the Cross. However, her prioress insisted it should be “of the Infant Jesus of Prague.” The nuns were prepared to start out on the foundation as soon as the necessary permission came from Rome, yet even after a long delay they still had received no word.

Finally, Mother decided to make a bargain with the Holy Infant. “If you really want this monastery to be named after You, get us the patent from Rome!” The important document arrived the very next day. The Infant Jesus had made His personal claim on this Carmel!

Today, over seventy years later, the Divine Child continues to bless this little dovecote of Our Lady, as St. Teresa liked to call her Carmels.
Our sole apostolate is prayer, especially for priests;
our mission, to give ourselves wholeheartedly to God
for the One, Holy, Catholic and Apostolic Church.

We welcome vocational inquiries from young women age 17-35 who feel drawn to a hidden life of prayer in the heart of the Church.